The right wood for me has to look good and sound good, and be stable enough so that it will last a very long time in the form of a musical instrument, subject to all the use (and abuse) this may encompass..

For soundboards this means stiff, lightweight wood which is perfectly split into billets before it is quarter sawn. I source the finest red cedar (thuja plicata) prefering the wood from Northern Vancouver Island and the Queen Charlotte Islands (Haida Gwaii). It is very light and even grain in texture, with very thin summer growth lines.
I am not interested in sinker wood, as far as soundboards are concerned, even though it has become popular as a marketing gimmick. Sinker wood is heavier, and more prone to cracking than fresh wood, properly cut and aged. Sinker wood often looks very pretty, though I will not use it.

Spruce (picea): I love using any good spruce. I will define "good spruce" as any which is stiff, light, split and quartered before it is sawn. So I will use European spruce, Lutz spruce, Engelmann spruce, and occasionally Sitka spruce. I have lots of spruce in my shop, from all over the world.
When I hear a luthier say "such and such a spruce is no good" what it suggests to me is that this particular luthier  has not found good quality wood within that particular species. Undoubtedly there is good spruce, but for whatever reason it eluded his hands. This is because the variation within a given species is extreme.

For example, some of the best spruce I ever used was Master Grade Lutz spruce. It was very stiff, and as light weight as good cedar, and it had a sparkly white colour. But I've had other lutz spruce in my hands that was horribly heavy and hard, and I would not want to use it for a guitar. Some lutz spruce is amazing, and some would be better off burned in the fireplace...
Where the wood grows, how fast it grew, and what part of the tree it is cut from, and many other factors will determine whether or not it's suitable wood. An experienced luthier treats each piece of wood as an individual. The properties of the wood are more important than its botanical designation...

Over the years I have used many different ebonies for fingerboards. Much of it came from India, Ceylon, and West Africa. Years ago most of this ebony was good, but I saw the quality decline to the point where I could not rely on it. Then I discovered Macasser Ebony from Indonesia. This was the best quality ebony, in so far that it is the only ebony that is still quarter sawn (more stable) and there is virtually no grain runout, making it stiffer and more stable. The only "issue" with Macasser ebony is that it is not always jet black, and this is the main reason it has until recently been less favored by the big instrument manufacturers (who buy most of the woods). But I like having some lighter brown streaks in the fingerboard. It gives the wood a bit of character.

Back and sides: There are many good woods to choose from. Indian rosewood (dalbergia latifolia) is what I've used the most over the years. But since 2005 I've been using many other rosewoods and non-rosewoods. Here are a few of them, and a short statement about that wood, from this luthiers perspective:

Brazilian rosewood (dalbergia nigra): Gorgeous looking. Get it quarter sawn if possible. More prone to cracking than other species of dalbergia. BRW is very expensive, and illegal to ship internationally, so it's only available to my Canadian clients. I have some very beautiful sets in stock which are very rare, hard to find quality. Some of it is quarter sawn, some is a mix of flat sawn and quartered. In stock

Indian rosewood (dalbergia latifolia): The pragmatic choice. Nice colors and it sounds great. It is the most dimensionally stable of the rosewoods, and it is not expensive. Sustainably harvested in India, since it's used to shade coffee trees. There is a reason most of the factories use Indian rosewood. Do not dismiss IRW just because it is ubiquitous. This is a signal that it reliable. In stock

Florida rosewood (dalbergia sissoo): You probably did not know about it. It is a variety of rosewood from Northern Indian, which was transplanted in Florida. Very pretty, with all the advantages of Indian rosewood, but a little more money. I don't have much of it left,  and likely will not replace it, just because it's difficult for me to obtain in Canada.  In stock

Cambodian rosewood (dalbergia cochinsinensis / bariensis): Extremely hard and heavy. In fact, the hardest/ heaviest of the rosewoods, except maybe for African blackwood -(dalbergia melanoxylon). Impossible to obtain legally in the west now, as it is poached from the Jungles of S.E. Asia and sold in China where it is highly coveted. I have a couple of sets left only, and will not be getting anymore of it, for ethical reasons. In stock

Cocobolo Rosewood (dalbergia retusa): From Mexico. It has a beautiful rusty orange color. Very hard, heavy, and resonant. I have a couple of beautiful sets in stock. One set, perfectly Quartered, tight grain, looks a lot like the rare Brazilian rosewood from a bygone era. The second set is nicely quartered, nice color, with a bit of sapwood.

Ziricote: Ziricote has the most striking figure of almost any wood. Dark black "spider web" lines, with beautiful layers of black, browns, and grey. It is tonaly an excellent wood too, similar if not identical to a high density rosewood. Popular among my clients. Great stuff. In stock

Bocote: The same genus as ziricote. A beautiful, dark brown wood with striking grain lines. I have some beautiful sets in stock. Although bocote is commonly used in electric and steel string guitars, it has been slow to get adopted in the classical guitar world. In time I hope this attitude changes, because it is such a nice wood. In stock

Pau Ferro: Also called Santos Rosewood or Bolivian rosewood by some, however it is not a true dalbergia. It has a brown color with narrow black lines in it. In terms of sound it is indistinguishable from the heavier dalbergia species. in stock

Maple: An indisputably great sounding wood which imparts a bell like quality to the tone, with a strong fundamental response. For the violin makers, maple helps reduce standing waves and excessive overtones. For the Jazz guitarists, maple is a great wood for helping create a clean, defined tone which is good for complex chord voicings. More and more classical guitarists are discovering the beauty and tone of maple. When nicely figured it is one of my favorite woods to build with. I have fiddle back and quilted varieties in stock.

Walnut: I have built many guitars with walnut back and sides. It's an excellent wood both visually and tonaly. I prefer it to maple mainly due to its gorgeous brown hues. Walnut wood gives great bell-like trebles, and generally speaking, sounds similar to maple. I have some very nice high figure/ color sets.
Claro Walnut: This sub-species of walnut grows on the west coast of North America: In stock
Persian Walnut: This is the "original Old World walnut" great colour and figure: In stock

Cypress: Cypress is associated with the flamenco guitar traditionally, but many luthiers are making excellent classicals with it too. in stock

European Pear Wood: I was lucky enough to obtain some beautiful figured pear wood. I am looking forward to trying it. Pear has been a traditionally favored wood by many European luthiers, but it has been slow to catch on in America.  in stock

Koa:  A gorgeous looking and sounding wood from Hawaii. The genus is acacia koa. - All grades of Koa, from low figured sets, to high figure, have become expensive in recent years, but still reasonable, considering how nice it looks and sounds. A warm, clean tone with a strong fundamental response is the result, in my experience. in stock


Here are a few pictures of some woods. Ask me for pictures of guitars made from other woods if you do not see what you want here. There are just a few examples: 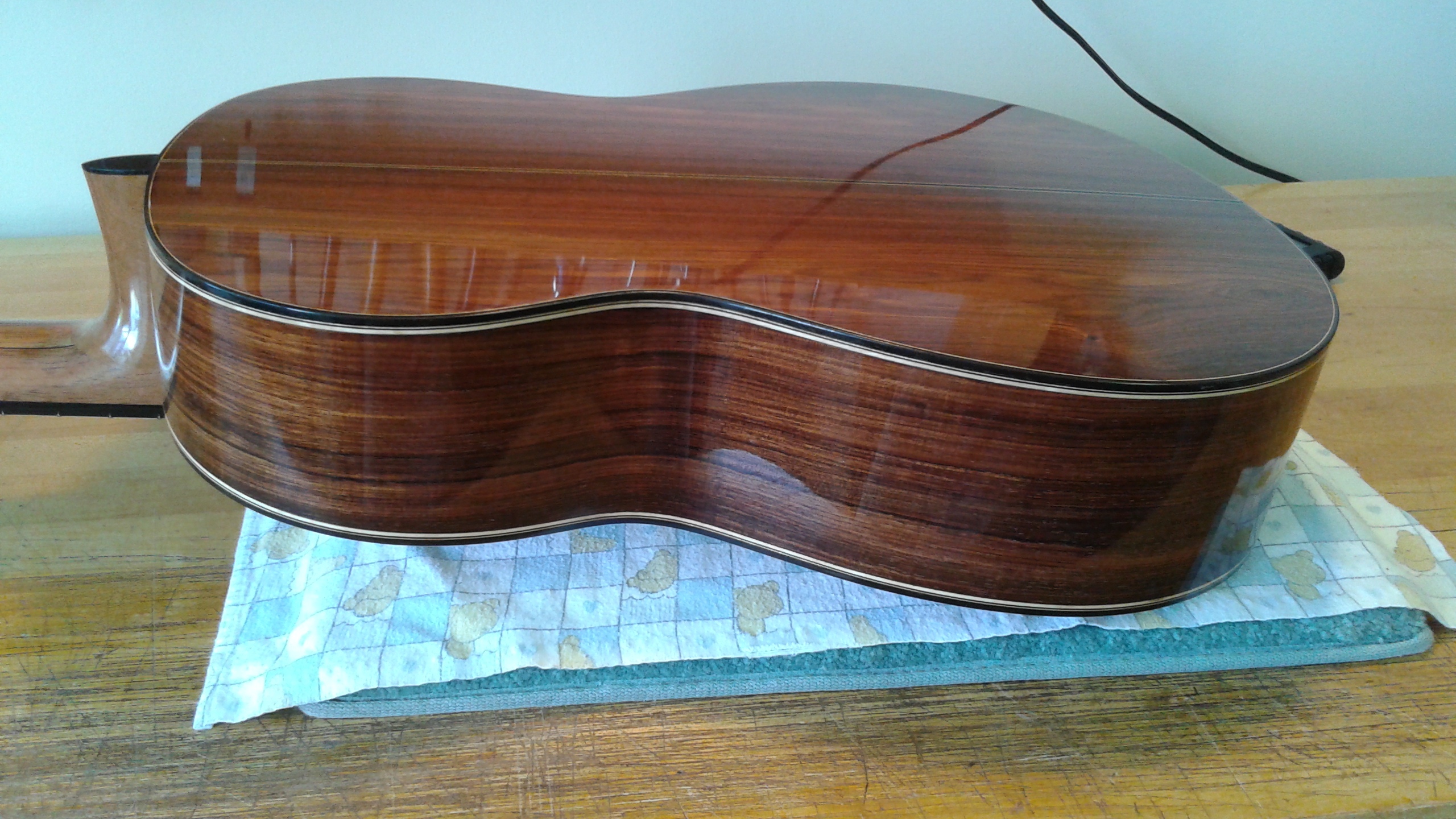 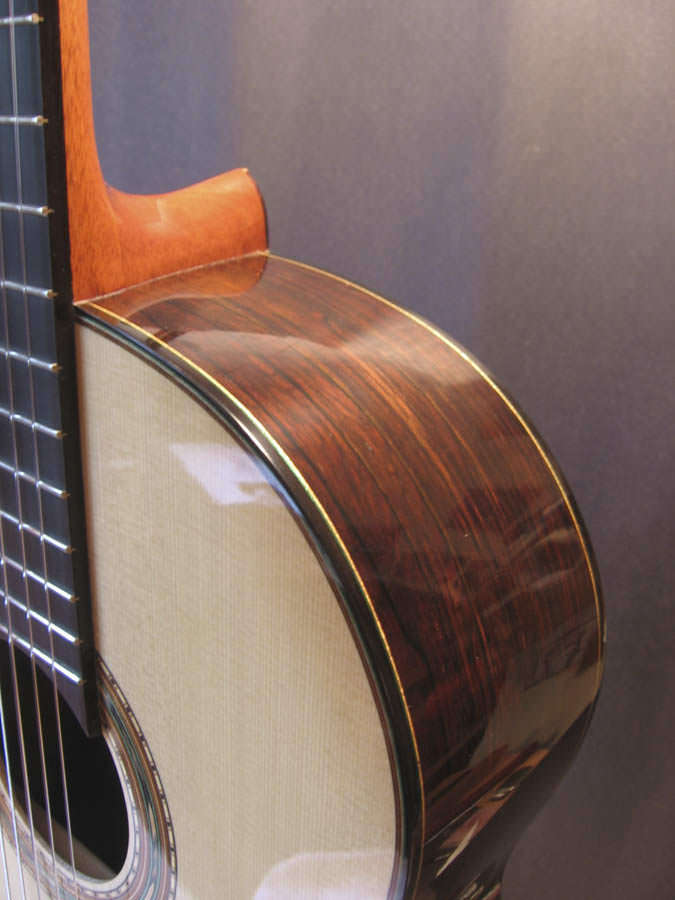 Guitar made with Italian spruce and the finest Brazilain rosewood- straight grained, quarter sawn, and colourful.  Binding is ebony.


Indonesian Rosewood, before and after the finish. 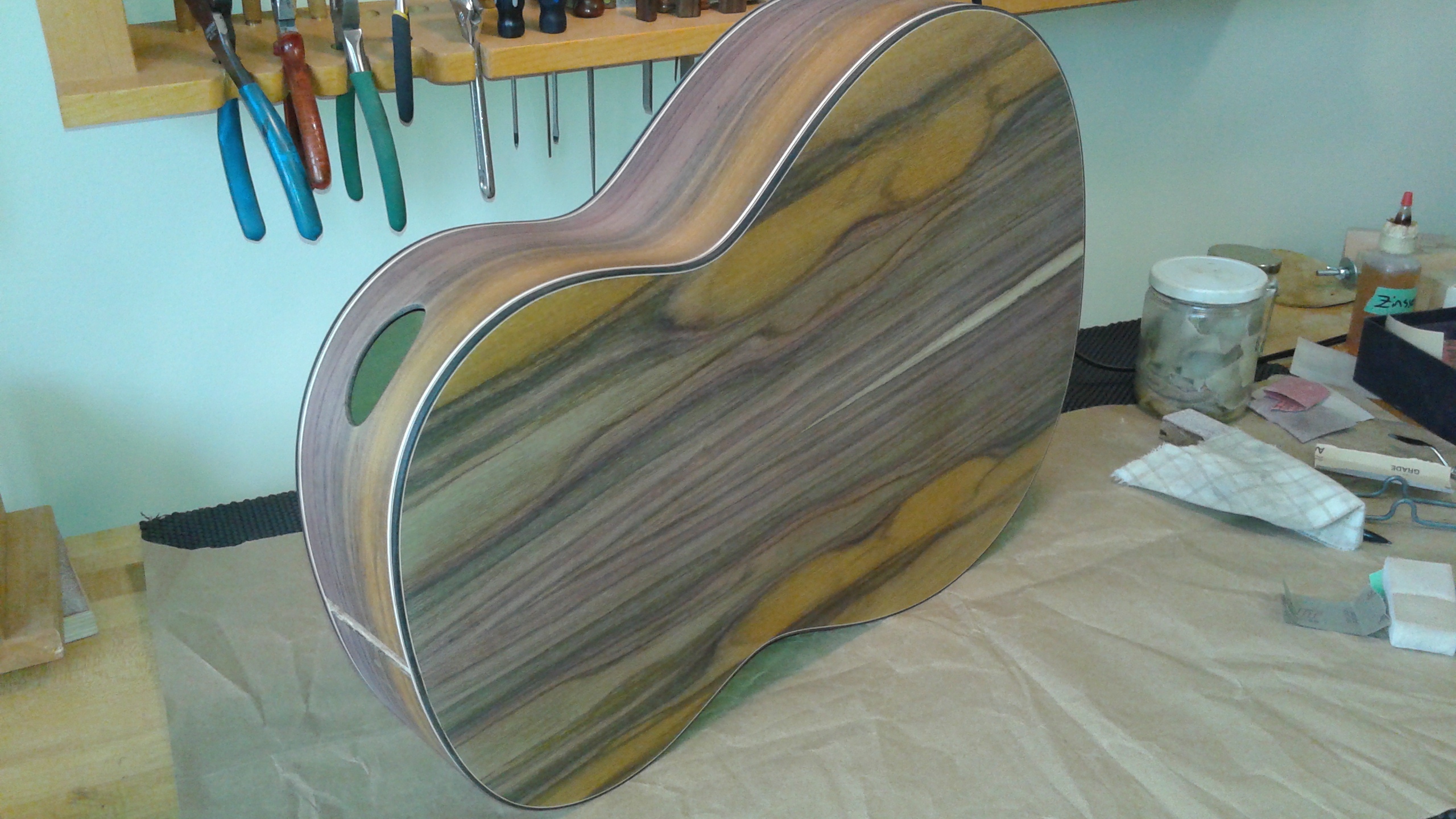 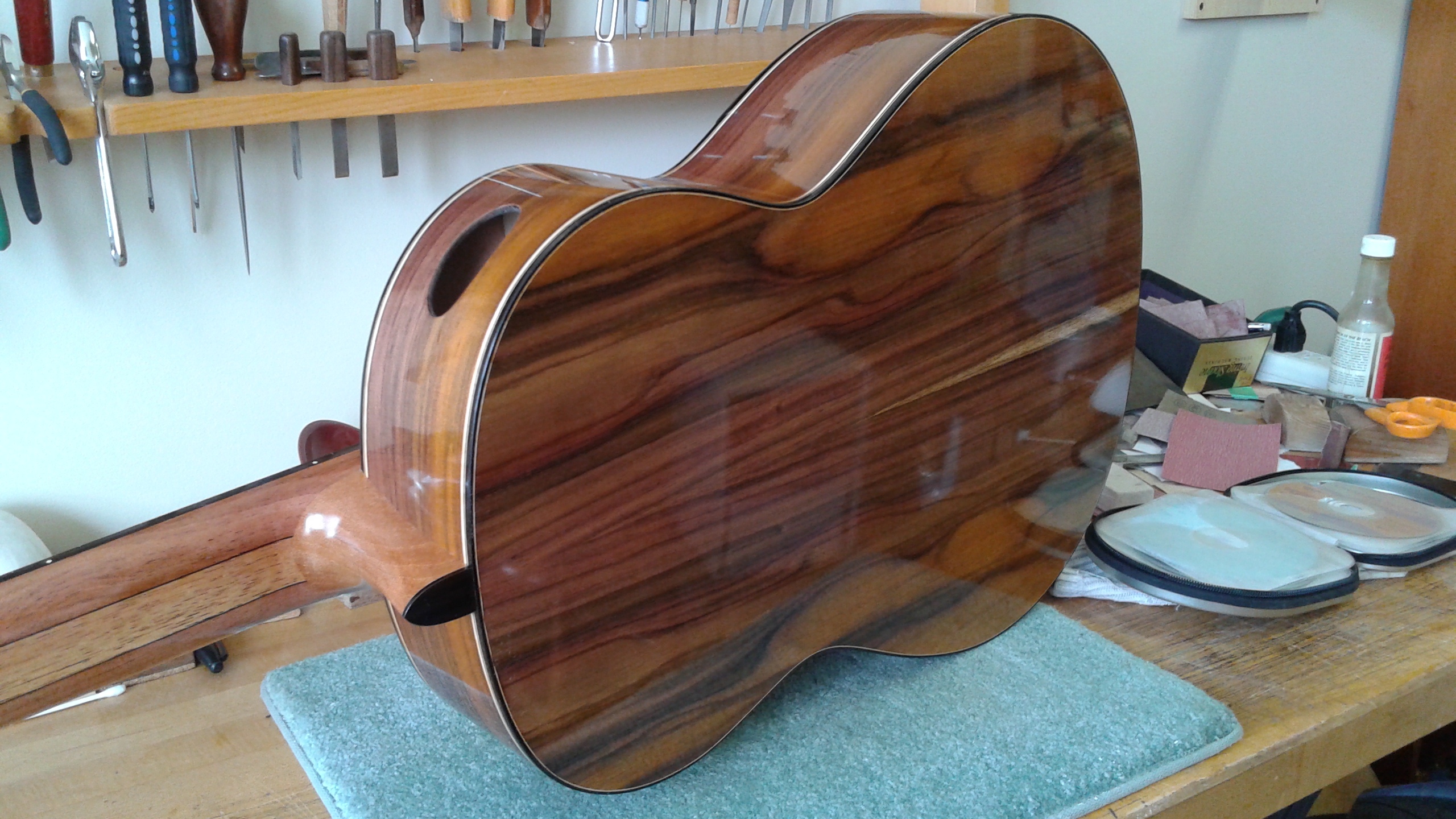 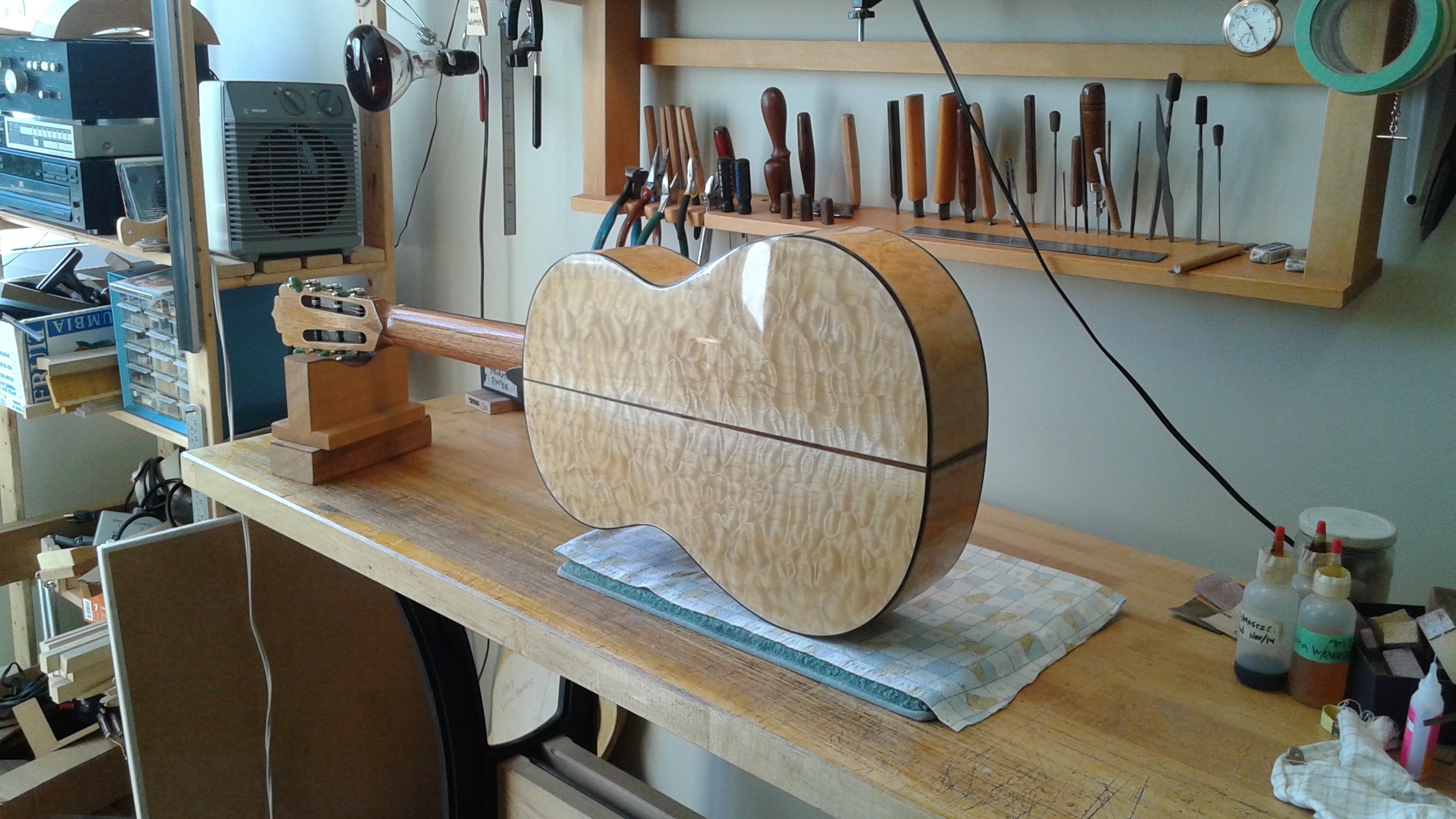 Why I use any particular wood is a function of its structural and tonal qualities, availability, and marketability. Some woods, like Bubinga for example, look and sound great, but most classical guitar players do not want it. As the traditional woods are becoming rapidly depleted many new species are being used as alternatives.

Antonio de Torres, who can be considered the father of the modern classical guitar, employed many unusual woods for his guitars. He used Brazilian rosewood when he could get it, but also used locust, maple, cypress, and pear wood for the backs and sides. He built guitars at a time when most of what he used was sourced localy. Imported woods were rare and expensive. Although in modern times this situation has changed, I believe that luthiers will soon be forced to use local materials once again. The exotic tropical woods - the rosewoods and ebonies, may one day be exhausted due to overharvesting and environmental stresses. Trade restrictions are making it difficult to obtain, or ship internationally some woods.

Luckily for luthiers and musicians, there are many excellent alternatives to the rare, exotic woods which we've come to think of as standard.